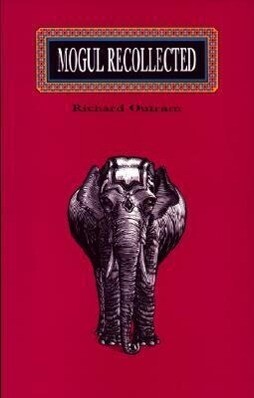 In 1836 an elephant drowned off the coast of New Brunswick. Poet Richard Outram explores the significance of this bizarre occurrence in his brilliant new volume of poetry, "Mogul Recollected." These witty and profound poems recreate the dismal conditions of Mogul's existence before he plunged to his death during a ship fire. Some are told from the point of view of Mogul himself, others from the perspective of ruthless trainers and circus owners. Recasting the tragedy as an inversion of the Noah's Ark story, Outram delineates with startling clarity man's betrayal of beast.

Outram was born in Canada in 1930. He was a graduate of the University of Toronto (English and Philosophy), and worked for many years at the Canadian Broadcasting Corporation as a stagehand crew leader. He wrote more than twenty books, four of these published by the Porcupine's Quill (Man in Love [1985], Hiram and Jenny [1988], Mogul Recollected [1993], and Dove Legend [2001]). He won the City of Toronto Book Award in 1999 for his collection Benedict Abroad (St Thomas Poetry Series). His poetry is the subject of a significant work of literary criticism, Through Darkling Air: The Poetry of Richard Outram, by Peter Sanger (Gaspereau Press, 2010).Richard Outram died in 2005.

'At first glance, this book seems simply to exploit an absurd and obscure moment in history. But Outram illuminates that moment and gives it meaning. He tells Mogul's story with grace and humour and majesty, in language that sometimes echoes Milton and Blake. And those who lament the passing of rhyme in Canadian poetry will be happy to see it used often, with considerable wit, in several pieces here.' Atlanta Review 'These poems unsettle us with their wit and outrage, and with bardic visionary power and love move us to recognize the beauty and suffering of all creation.' Ottawa Citizen 'These are clearly the poems of a virtuoso. Few poets now writing (here or elsewhere) have displayed throughout their work such an accurate sense of rhythm. I think of an earlier collection -- Man in Love -- and such poems as Dr Doolittle and Spring at the Cottage, in which the unapologetically latinate phrasing moves as nimbly as the Monarch butterfly on its cover. In Mogul Recollected this same ease of breath is evident in a wide variety of forms, from the biblically weighted The Prophet of Penobscot Bay to the scat-snappy The Insane Root.' paperplates 'At the most lyrical of moments, fractured time, objects, and idiosyncratic details are telescoped and set awhirl in Outram's swirling style.' Quill & Quire About a PoemCaroline Adderson on Richard Outram' 'Mogul's Eye'Mogul's EyeDid not survive fire and water, nor earth, nor air; not the cumbrous elements. Nor did it become quintessence, numberless as thou seest. No. It is closed, clothed in darkness for all time.Mogul's eye was the still centre, the sometime calm in the loomed elephant rage to be. Wherein it mirrored the creature sun.Mogul's eye had looked on eternal light grooming the endless orient riverine grasslands; piercing the overlapped canopy of the felled forest; burning stark verticals in high mountain passes; knifing through chinks in the slats of a boxcar, holding the motes mingled in shafts of gold; tangling snarls in the steel mesh of enclosures; rebounding blaze from a bucket of living water; quenched forever at last in Penobscot Bay.Mogul, alone among other beasts, in common with man, could weep, and did, real tears from his small eye. In common with man, not without cause. He drowned in salt water.Being not man nor angel but beast, Mogul saw not through his eye by with it life in the myriad present: which is immortal.And he beheld, as he was beholden to, what he became: his one death.This is the final poem in Richard Outram's 1993 book, Mogul Recollected. Taken on its own, it cannot convey the cumulative power of the collection, which concerns a true event, the 1836 sinking of a ship in Penobscot Bay. The Royal Tar was transporting a circus when, during a storm, the mishandled boiler caught fire. Terrified by the waves, but also the flames, Mogul the elephant refused to jump into the ocean. instead he placed his forelegs on the deck railing, which then collapsed under his weight causing him toplunge onto a full life raft. All, including the elephant, drowned.The poems look at the tragedy, which would otherwise be lost to history, from every possible angle, and here, in the final poem, the reader, already forced to contemplate not only the significance of death by fire and water of a fellow creature, but also its terrible treatment in life, now must look Mogul directly in the eyeand ask the age-old question: why must we suffer? The question is, of course, as unanswerable as the darkness of the death we are "beholden" to is inevitable. (Death and the ability to suffer are two more things we have in common with elephants beyond the abilityto cry.) Yet Mogul's brave eye, "the still centre," ever sought out the light, which in turn ever diminished as he moved from freedom to captivity, until it was just the "rebounding blaze" from the burningship reflected in the water bucket of slavery. Still he saw it, "eternal" light. he saw with that light-seeking eye, instead of through it.In none of the four or five times that I've read Mogul Recollected, have i been able to get through it without sobbing for an elephant who perished more than a century and a half ago. The poems are a call to compassion, which literally means "to suffer together." We suffer with the animals (though somewhat less so than they, I would venture), yet it is they who teach us how we might finally reach immortality. With their particular wisdom -- instinct, intuition, creature insight -- they perceive "life in the myriad present," which goes on and on, recorded or not. -- Caroline Adderson 2010 Shambhala Sun magazine