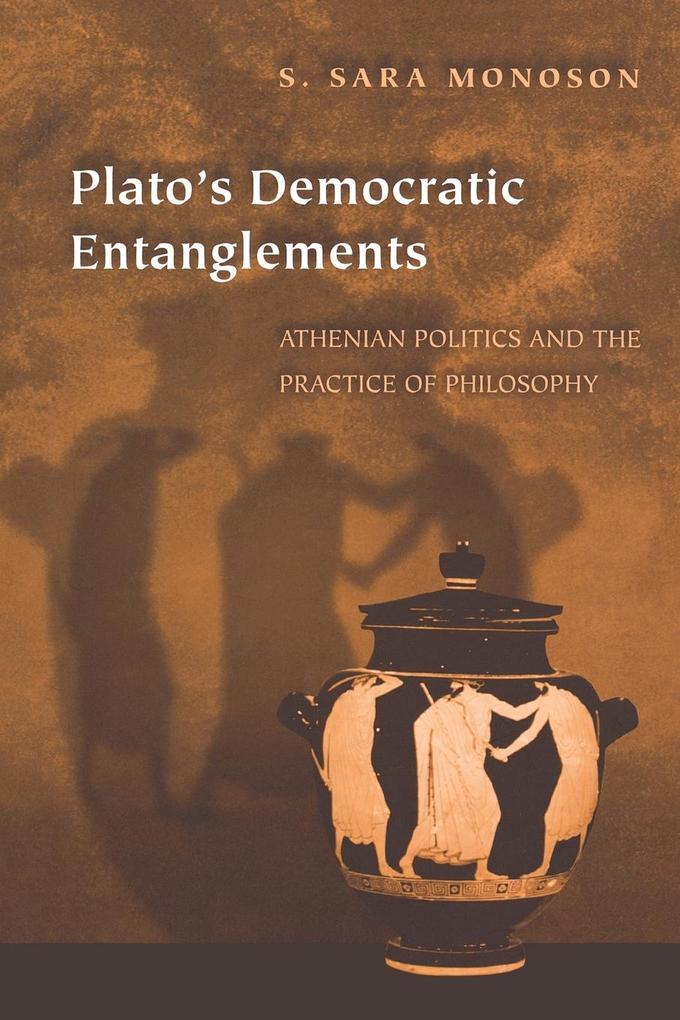 von S. Sara Monoson
Athenian Politics and the Practice of Philosophy. Paperback. Sprache: Englisch.
Taschenbuch
In this book, Sara Monoson challenges the longstanding and widely held view that Plato is a virulent opponent of all things democratic. She does not, however, offer in its place the equally mistaken idea that he is somehow a partisan of democracy. In … weiterlesen
Geschenk per Mail versenden
Taschenbuch

Athenian Politics and the Practice of Philosophy.
Paperback.
Sprache: Englisch.

In this book, Sara Monoson challenges the longstanding and widely held view that Plato is a virulent opponent of all things democratic. She does not, however, offer in its place the equally mistaken idea that he is somehow a partisan of democracy. Instead, she argues that we should attend more closely to Plato's suggestion that democracy is horrifying and exciting, and she seeks to explain why he found it morally and politically intriguing.

Monoson focuses on Plato's engagement with democracy as he knew it: a cluster of cultural practices that reach into private and public life, as well as a set of governing institutions. She proposes that while Plato charts tensions between the claims of democratic legitimacy and philosophical truth, he also exhibits a striking attraction to four practices central to Athenian democratic politics: intense antityrantism, frank speaking, public funeral oratory, and theater-going. By juxtaposing detailed examination of these aspects of Athenian democracy with analysis of the figurative language, dramatic structure, and arguments of the dialogues, she shows that Plato systematically links democratic ideals and activities to philosophic labor. Monoson finds that Plato's political thought exposes intimate connections between Athenian democratic politics and the practice of philosophy.

Situating Plato's political thought in the context of the Athenian democratic imaginary, Monoson develops a new, textured way of thinking of the relationship between Plato's thought and the politics of his city.

Acknowledgments ix
INTRODUCTION Siting Plato 3
PART ONE: Aspects of the Athenian Civic Self-Image 19
CHAPTER ONE The Allure of Harmodius and Aristogeiton: Public/Private Relations in the Athenian Democratic Imaginary 21
Telling the Tale 22
Embracing the Simplified Tale 28
Thinking with the Tale 29
Thucydides' Critique 42
Aristotle's Critique 49
CHAPTER TWO Citizen as Parrhesiastes (Frank Speaker) 51
Truth-Telling and Risk-Taking 52
Frank Speaking and Freedom 54
Frank Speaking and the Integrity of Assembly Debate 56
CHAPTER THREE Citizen as Erastes (Lover): Erotic Imagery and the Idea of Reciprocity in the Periclean Funeral Oration 64
Citizen as Erastes 67
Citizenship as Reciprocity between Lover and Beloved 74
CHAPTER FOUR Citizen as Theates (Theater-Goer): Performing Unity,
Reciprocity, and Strong-Mindedness in the City Dionysia 88
The Event 90
Representing the Unity of the Democratic Polis 92
Enacting Democratic Norms 98
PART TWO: Plato's Democratic Entanglements 111
CHAPTER FIVE Unsettling the Orthodoxy 113
Philosopber as Tyrant-Slayer 113
The Matter of Bias 115
Dismay over the Fate of Socrates 118
Disdain for the Common Man 122
The 'Doctrine" of the Republic 125
The Work of the Academy 137
Personal Involvement in Syracusan Politics 145
CHAPTER SIX Philosopher as Parrhesiastes (Frank Speaker) 154
The Laches: Recognizing Parrhesia 155
The Gorgias: Embracing Parrhesia. 161
The Republic: Practicing Parrhesia 165
The Laws: Practicing Parrhesia 179
CHAPTER SEVEN Remembering Pericles: The Political and Theoretical Import of Plato's Menexcnus 181
Plato's Opposition to the Veneration of Pericles 182
Plato's Rcjection of Pericles Model of Democratic Citizenship 189
Plato's Theoretical Interest in Funeral Oratory 202
CHAPTER EIGHT Theory and Theatricality 206
A Puzzle 206
Four Patterns 207
Preliminary Thoughts on Theory and Theater-going 208
Philosopber as Theates in the Republic 212
Theorist as Theoros in the Laws 226
Why Is Socrates Absent from the Laws? 232
Concluding Remarks 237
Citation Index 239
General Index 245