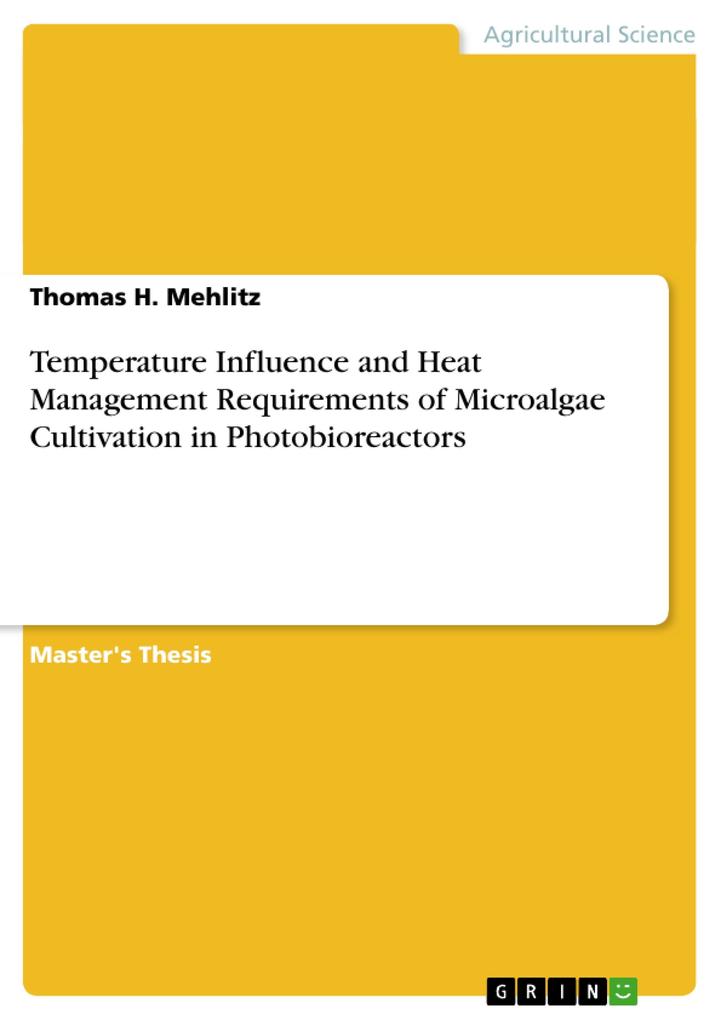 Master's Thesis from the year 2009 in the subject Agrarian Studies, grade: 1, California Polytechnic State University, language: English, abstract: Microalgae are considered one of the most promising feedstocks for biofuel production for the future. The most efficient way to produce vast amounts of algal biomass is the use of closed tubular photobioreactors (PBR). The heat requirement for a given system is a major concern since the best algae growth rates are obtained between 25-30 °C, depending on the specific strain. A procedure to determine temperature influence on algal growth rates was developed for a lab-scale PBR system using the species Chlorella. A maximum growth rate of 1.44 doublings per day at 29 °C (optimal temperature) was determined. In addition, a dynamic mathematical model was developed to simulate heating and cooling energy requirements of tubular PBRs for any desired location. Operating the model with hourly weather data as input, heating and cooling loads can be calculated early in the planning stage of a project. Furthermore, the model makes it possible to compare the operation inside a greenhouse to the outdoor operations, and consequently provides fundamental information for an economic feasibility study. The best configuration for a specific location can be evaluated easily. The model was exemplary tested for a hypothetical 100,000 l photobioreactor located in San Luis Obispo, California, U.S.A. Average algae productivity rates of 23% and 67% for outdoor and indoor PBR operations, respectively, were obtained. Actual energy loads (heating and cooling) needed to maintain the PBR at optimal temperature were determined and compared. Sensitivity analyses had been performed for abrupt temperature and solar radiation steps, PBR row distances, ground reflectivities, and ventilation rates of the greenhouse. An optimal row distance of 0.75 m was determined for the specific PBR. The least amount of energy was needed for a ground reflectivity of 20%. The ventilation rate had no major influence on the productivity rate of the system. Results demonstrated the importance of a simulation model as well as the economic impact of a sophisticated heat management system. Energy savings due to an optimized heat management system will eventually increase proficiency of the systems, which will support a new sustainable industry and future developmental potential.