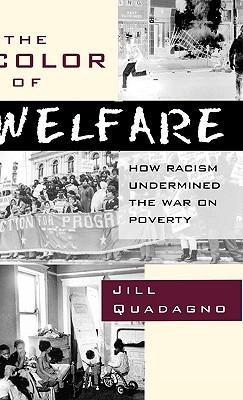 The Color of Welfare: How Racism Undermined the War on Poverty

Titel: The Color of Welfare: How Racism Undermined the War on Poverty
Autor/en: Jill Quadagno

Unfinished Democracy traces the history of the American welfare state since the launching of the `War on Poverty'. Quadagno argues that a major reason the United States has lagged behind other countries in job training, housing, child care, welfare reform, and social security is that issues of race are tightly intertwined with social programmes, creating a backlash that brought the new Right into power and shapes our options today.

About the Author: Jill Quadagno is Professor of Sociology and Mildred and Claude Pepper Chair in Social Gerontology at Florida State University. She is the author of The Transformation of Old Age Security.

"This important book provides a lucid and perceptive analysis of the War on Poverty and the turbulent race politics which surrounded and ultimately engulfed it. More than that, by placing racial inequality at the very center of her analysis, Jill Quadagno makes a major contribution to our understanding of the distinctive development of the American welfare state."--Frances Fox Piven, co-author of Why Americans Don't Vote and Regulating the Poor
"A leading authority on the American welfare state, Jill Quadagno makes a compelling case for her thesis that racism has done more than any other fact to limit generous and dignified public social provision in the United States. Scholars, students, and policy-makers all have much to learn from this important book."--Theda Skocpol, author of Protecting Soldiers and Mothers--The Political Origins of Social Policy in the United States
"A telling analysis of race as the key faultline of American social policy."--Joel Blau, author of The Visible Poor: Homelessness in the U.S.
"The graceful prose of Jill Quadagno's new book conceals a hard-hitting argument about the critical importance of racism in shaping the American welfare state. Based on exhaustive research in primary sources, she tells a story which has not been told before. Even child care programs, not to mention family assistance, job training, and housing programs have been decisively shaped by the politics of race. Theoretically, her argument challenges the claim that America's 'liberal values' have been a main barrier to the expansion of the American welfare state."--Robert R. Alford, author of HealthCare Politics

Schreiben Sie eine Bewertung für: The Color of Welfare: How Racism Undermined the War on Poverty