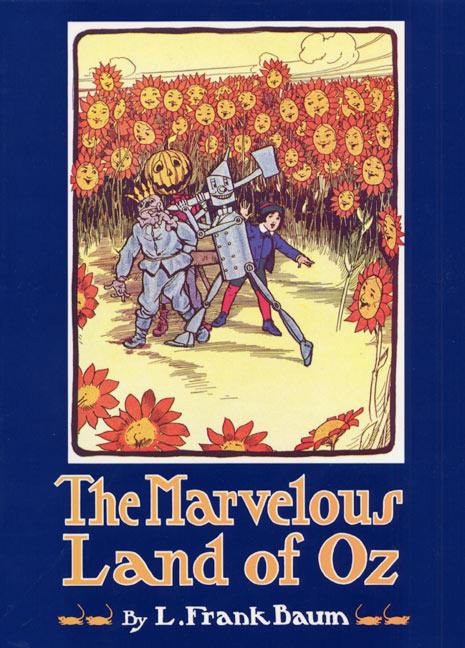 The Marvelous Land of Oz

Few fantasy lands have captured our hearts and imaginations as has the marvelous land of Oz. For over four generations, children and adults alike have reveled in the magical adventures of its beloved folk. Now, for the first time in over seventy years, the second book about Oz is presented here in the same deluxe format as the rare first edition, complete with all 16 of the original John R. Neill color plates, its colorful pictorial binding, and the many black-and-white illustrations that bring it to joyous life.
First issued in 1904, L. Frank Baum's The Marvelous Land of Oz is the story of the wonderful adventures of the young boy named Tip as he travels throughout the many lands of Oz. Here he meets with our old friends the Scarecrow and Tin Woodman, as well as some new friends like Jack Pumpkinhead, the Wooden Sawhorse, the Highly Magnified Woggle-Bug, and the amazing Gump. How they thwart the wicked plans of the evil witch Mombi and overcome the rebellion of General Jinjur and her army of young women is a tale as exciting and endearing today as it was when first published over eighty years ago.
Afterword by Peter Glassman. A facsimile of the rare first edition, complete with all 16 original color plates, a colorful pictorial binding, and over 125 of Neill's drawings. A Books of Wonder(R) Classic.

L. Frank Baum (1856-1919) published The Wonderful Wizard of Oz in 1900 and received enormous, immediate success. Baum went on to write seventeen additional novels in the Oz series. Today, he is considered the father of the American fairy tale. His stories inspired the 1939 classic film The Wizard of Oz, one of the most widely viewed movies of all time.
Michael Sieben is a professional designer and illustrator, primarily within the sub-culture of skateboarding, whose work has been exhibited and reviewed worldwide as well as featured in numerous illustration anthologies. He is a staff writer and illustrator for Thrasher magazine, and a weekly columnist for VICE.com. He is also a founding member of Okay Mountain Gallery and Collective in Austin, Texas, as well as the cofounder of Roger Skateboards. The author of There's Nothing Wrong with You (Hopefully), he lives and works in Austin.