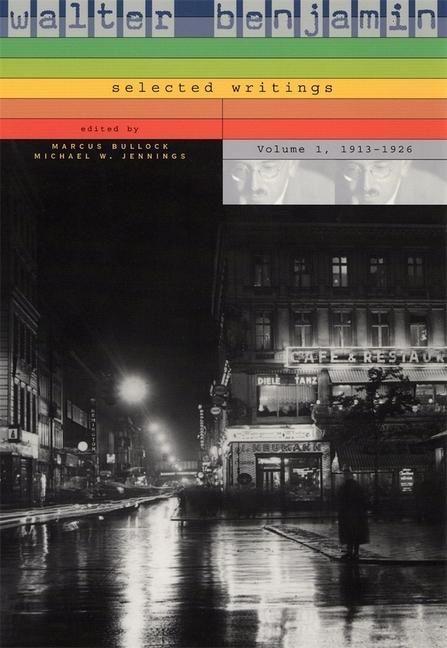 This first volume shows that even as a young man Benjamin possessed astonishing intellectual range and depth. His topics here include poetry and fiction, drama, philosophy, history, religion, love, violence, morality, mythology, painting, and much more. He is as compelling and insightful when musing on riddles or children's books as he is when dealing with weightier issues such as symbolic logic or epistemology.

Metaphysics of Youth, 1913-1919 "Experience" The Metaphysics of Youth Two Poems by Friedrich Holderlin The Life of Students Aphorisms on Imagination and Color A Child's View of Color Socrates Trauerspiel and Tragedy The Role of Language in Traucrspiel and Tragedy On Language as Such and on the Language of Man Theses on the Problem of Identity Dostoevsky's The Idiot Painting and the Graphic Arts Painting, or Signs and Marks The Ground of Intentional Immediacy The Object: Triangle Perception Is Reading On Perception Comments on Gundolf's Goethe On the Program of the Coming Philosophy Stifter Every Unlimited Condition of the Will Types of History The Concept of Criticism in German Romanticism Fate and Character Analogy and Relationship The Paradox of the Cretan The Currently Effective Messianic Elements Angelus Novus, 1920-1926 The Theory of Criticism Categories of Aesthetics On Semblance World and Time According to the Theory of Duns Scotus On Love and Related Matters The Right to Use Force The Medium through Which Works of Art Continue to Influence Later Ages Critique of Violence The Task of the Translator Notes for a Study of the Beauty of Colored Illustrations in Children's Books Riddle and Mystery Outline for a Habilitation Thesis Language and Logic (I-III) Theory of Knowledge Truth and Truths / Knowledge and Elements of Knowledge Imagination Beauty and Semblance The Philosophy of History of the Late Romantics and the Historical School The Meaning of Time in the Moral Universe Capitalism as Religion Announcement of the Journal Angelus Novus Goethe's Elective Affinities Baudelaire (II, III) Calderon's El Mayor Monstruo, Los Celos and Hebbel's Herades und Mariamne Letter to Florens Christian Rang Stages of Intention Outline of the Psychophysical Problem Even the Sacramental Migrates into Myth On the Topic of Individual Disciplines and Philosophy "Old Forgotten Children's Books" Naples Curriculum Vitae (I) Reflections on Humboldt Review of Bernoulli's Bachofen Johann Peter Hehel (I): On the Centenary of His Death Johann Peter Hebel (II): A Picture Puzzle for the Centenary of His Death A Glimpse into the World of Children's Books One-Way Street A Note on the Texts Chronology, 1892-1926 Index